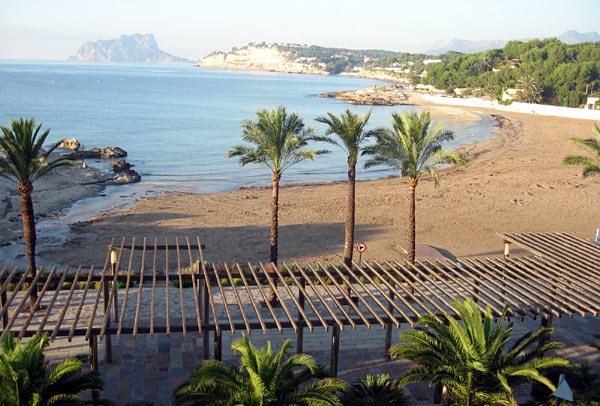 Located on the north Costa Blanca in the municipality of Teulada and midway between Valencia and Alicante airports, Moraira is one of the most sought after areas along the coast as well as an mportant international tourist center. Moraira Property is desirable, thus making prices slightly higher than surrounding areas such as Teulada, Benitachell and Benissa

The first known figures on the number of houses of Moraira is 1860. According to the Gazetteer of the Province of Alicante for that year – “Morayra hamlet which is 6’1 km from Teulada” has 38 houses, 25 two-storey and one unspecified. Of these, 27 are permanently inhabited, one temporary and 10 are not inhabited. According to the Prosecutor Register of Buildings and Building Sites in 1922 the number of houses in the streets of Moraira was as follows: New street [now Dr. Calatayud] (10 houses), street stores (23 houses), Beach street (4 houses), Sea street (4 houses) Carrreró street (5 houses); Altogether a total of only 46 houses.

In Gazetteer of the Province of Alicante in1940, “Rada de Moraira” (also considered a “village”) had added to the housing stock 55 and 9 homes for other uses. The number of inhabitants of law for this year was around 212 – 215.

Later, towards the sixties began the advent of tourism and with it the expansion of the town, first with the construction of new houses on the street called “Dr. Calatayud, “and then with the opening of new roads along the path of El Portet (lanes Denia and John XXIII). Back in the 70’s Madrid Avenue and then the remaining lanes to either side of the avenue were opened. Recently this important road was extended west to open a new access to the population that begins near the former home of “On” and goes up the coastal road from Moraira to Calpe.

Still a relatively small fishing town, Moraira attracts property purchasers due to its mountain greenery, fantastic scenery, perfect climate, and excellent range of top quality restaurants, shops, boutiques and a large marina where you can find some luxury yachts as well as a large variety of water sports on offer.

Due to the strict planning controls by the town hall of Moraira, the town has no high rise apartments and hotels, making the majority of properties in Moraira town low rise apartment blocks, but the surrounding areas offer a wide range of bungalows, duplex’s and many fantastic detached villas surrounded by pine forests.

Urbanisations surrounding the coast are all established, and in areas such as Moravit, and Fanadix there are still some reasonably priced properties for sale. Property on an urbanisation will usually have community charges attached, which help pay for the upkeep of all the communal areas and this cost should be taken into consideration before purchase. Many people prefer to buy holiday homes on such a community as it eliminates the need for garden and pool maintenance for absent owners.

Leaving Moraira town and heading towards Benitachell through terraced vineyards and orange groves are the popular areas of Villotel and Pueblo Alcazar. Only a 5 minute drive from the beaches, property in these areas consist mainly of apartments, duplex and bungalows. On the other side of the road is Sol Park, which has its own football pitch and tennis courts, whilst up into the mountain is Sabatera and Benimet where detached villas on larger plots and with sea and mountain views can be found.

San Jamie is the most prestigious urbanisation in Moraira. Split down the middle, one half is situated in the municipal district of Benissa, whilst the other (more expensive) part is in the borough of Teulada/Moraira. Owners of property in San Jamie benefit from having a golf club on the doorstep, tennis courts, club/bar, walking distance to supermarkets, shops, bars and restaurants as well being in very well kept and established surroundings.

El Portet is the luxury end of Moraira with million euro villas overlooking a beach that is popular with families with small children because of its shallow waters. A beach front bar and restaurant provides a lovely setting looking out across the bay, but parking can be difficult in high season.

Moraira does not close down during winter as so many other coastal resorts do. There is still the Friday market, a wide variety of bars, restaurants and nightlife, so is the ideal place for a winter holiday or permanent residence.

If you are looking for Moraira Property, contact us with your requirements and be sure we will find you something suitable 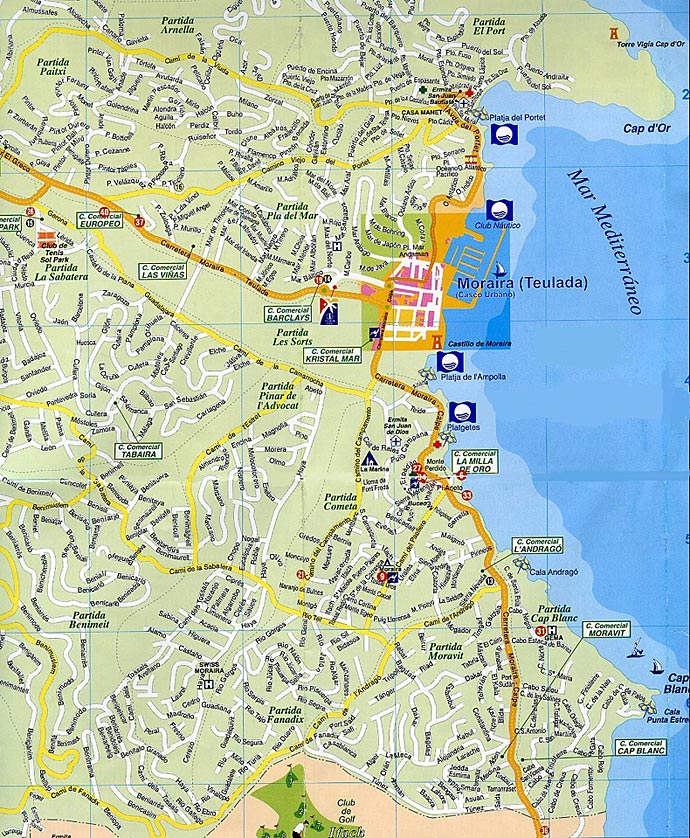