Famous for its natural cave, Cueva de Calaveres, the village of Benidoleig is situated in a semi-rural location in the valley of Sierra de Seguili, between Pedreguer and Orba. The 50,000 year old cave is located on the main Pedreguer to Benidoleig road and boasts magnificent stalacmites and stalactites, well worth the small entrance fee, especially on a hot summers day where you will find the coolness of the Benidoleig caves a pleasure.

Benidoleig is a farming area, made up of orange and lemon groves and is home to approximately 800 residents, the village being predominantly Spanish, whilst the surrounding urbanisations are made up of a mix of British, German, Dutch and Spanish. There are many fiestas in the village, where you can become part of the community, joining in the festivities from dusk till dawn.

From many areas within Benidoleig there are fantastic mountain, valley and sea views to Denia and the natural park of the Montgo Mountain.

The ‘hub’of village life in Benidoleig, especially for expats, has to be ‘El Cid’, which provides not only a restaurant and night time entertainment, but a Charity Auction every Friday, bowling club, weight watchers class, hairdresser, and leisure oasis for those in need of a little pampering.

Property in Benidoleig. The area consists mainly of villas, although there are a few townhouses on the market. The villages houses rarely become available, and when they do, are generally snapped up by the Spanish, who tend to prefer the social life in the village to that of the ‘campo’. For those who want to live within a community as opposed to a coastal town, Benidoleig has a lot to offer. Property prices are slightly cheaper inland than on the coast, and you are likely to get a lot more property for your money – as well as those fantastic views!

One the oldest towns on the Costa Blanca, Benissa is an area of beautiful countryside and coastline, terraced vineyards, mountains and palm trees.

Midway between the scenic Jalon Valley and the coast, Benissa old town is much the same as it has been for centuries – narrow streets, churches, shops, town square (Plaza) and the town hall along with a vast array of typically Spanish restaurants and bars. Property in Benissa town, consists mainly of 3 storey village houses, which are deceptively spacious inside, and apartments.

Heading away from town down beautiful winding roads through terraced countryside and towards Benissa’s 4km of coastline, the sea views are fantastic and dotted around are lone country villas and fincas, along with the occasional restaurant. Benissa property in these areas, such as Pedramala is set amongst vineyards and often have large plots and panoramic views to the sea.

Many are not aware that the municipality of Benissa does actually have its own coast, and see the area purely as ‘the coast road’ between the towns of Moraira and Calpe. However, the visitor can find a mix of cliff tops, rocky coves, sandy beaches and tiny bays along the Benissa Costa.

Leaving the town of Calpe is the sports harbour where you can find diving, windsurfing, kayaking and many other water sports being taught. Property in this area of Benissa, ‘Les Bassetes’, consists mainly of luxury first and second line villas overlooking the harbour. Further along the coast road is La Fustera, Cala dels Pinets, Cala de La Llobella, Cala l’Advocat, Baladrar and Cap Blanc where there are many urbanisations, mainly mountainside such as Fanadix, Montemar, Buenavista, Los Almendros and San Jamie which sits on the boundary between Benissa and the municipality of Teulada/Moraira .

Many visitors are attracted by the beautiful countryside and coastline, the excellent climate and, for the north Costa Blanca, relatively cheap property prices. Property in Benissa is still able to offer a lot more for your money than either Moraira or Calpe, either of which is only a 10 minute drive. Typical of the area are established urbanizations with 70’s – 80’s built traditional villas with thick walls and often with separate guest apartments and established Mediterranean gardens, as well as a range of luxurious sea front property.

The Benissa Costa is beautiful and green with its little coves, beach bars, picnic areas, mountains and in the majority of cases the villas here offer exceptional views of mountains, sea and the Peñon de Ifach (Rock of Calpe).

Property in Benissa offers excellent value for money with detached villas for as little as 230,000 Euros, and all along this winding coast road are bars, restaurants, shops, banks, supermarkets, beach bars, and of course the Mediterranean sea. A serene location, fantastic views, local facilities and with the lively towns of Moraira and Calpe close by, this area offers the visitor the best of both worlds. 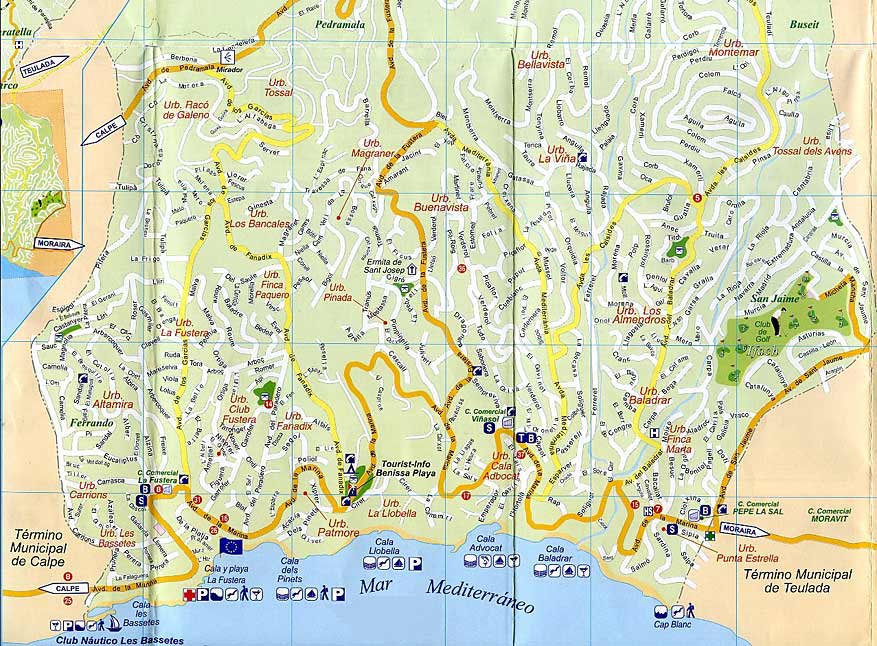