Dénia, Costa Blanca – named by the romans after the Goddess Diana, is the capital of the Marina Alta district, which consists of 33 local councils. In 2013 the town reached a population of 44,500 inhabitants but during the summer season its population may reach 200,000. The climate, as in most of the Coastal towns of the Costa Blanca, is almost paradise with an annual average of 19 ° C.

Stretching over 20km, the beautiful sandy beaches of Denia have been awarded the European blue flag for many years. The beaches of Denia are divided into two parts, to the north is les Marines / las Marinas, where the beaches are flat and sandy perfect for sunbathing in the soft breeze, swimming or walking along the shore, as well as providing a variety of water sports. Areas along this stretch of coast include Les Deveses, Els Poblets, L’Almadrava, and Les Bovetes, whilst to the south are the beautiful rocky coves and rambling footpaths of Les Rotes / Las Rotas featuring areas such as La Cala and Punta Negra – all backed by the Montgo. The seabeds of Denia offer a paradise for scuba divers in the marine reserve of Cape San Antonio provides divers with underwater paths, and which and has been awarded a Places of Community Interest award.

In the centre is the town with it’s shops and cosmopolitan bars, restaurants and pavement cafés in the tree lined Marquis de Campo, which is the main street of the town, leading up to the Glorieta del Pais Valencia where weary shoppers sit in the square under the pegola which is covered in climbing plants and flowers. Dénia is the most cosmopolitan town along of the North coast of Alicante; it is a town full of life, colour and Mediterranean joy – and that is reflected in its streets and its people.

Along the promenade is the Marina Port, where ferries leave daily for Mallorca and Ibiza, and the Yacht club which provides over 1000 mooring spaces for yachts of any size for those with nautical interests. In the evening, there is a local market where you can take a leisurely stroll browsing the bags, jewellery and local crafts on sale.

The Castle housing the Archaeological Museum, is a local Heritage Monument where the Marquis of Denia resides and where cultural event including outdoor concerts are held. The castle provides beautiful views over the town and to the Montgo Natural Park, which is the ‘dividing line’ between Denia and its neighbour Javea. Those of an athletic disposition can climb the five hour or so journey all the way to the top of this magnificent mountain (so named because of its resemblance to an elephants trunk) giving those who are successful the glorious views across the sea to Ibiza on a clear day.

The Montgo mountain also called Kaon, and which depicts and elephants trunk jutting out over the sea, occupies much of the southern half of the area and was declared a Natural Park in 1987. At its feet is the Cape of San Antonio, which is the Marine Reserve and between the sea and the Montgo plain known as Pla of Dénia, are large areas of fertile land.

Dénia has the most fiestas in the Marina Alta district . Whichever month you decide to visit throughout the year, you are bound to catch at least one. The most spectacular are the Fallas, held in March to celebrate Saint Joseph the carpenter, where effigies of cartoon type local politicians up to 100ft high are burnt to the ground one by one, and in July the Fiestas of the Holy Blood which includes bull running on the sea front as well as fireworks, and musical concerts. In August, the Moors and Christians, which is held in many towns across Spain, is a striking theatrical show with all the participants in costume, mock battles and the famous Andalucian horses. Each fiesta will generally last 10 days, so you have plenty of time to party, but prepapred to walk into the town centre, parking is often very difficult!

Driving over the mountain road of the Montgo, you can reach the popular town of Javea within 10 minutes, and just a short drive inland you will find the towns of Ondara and Pego. 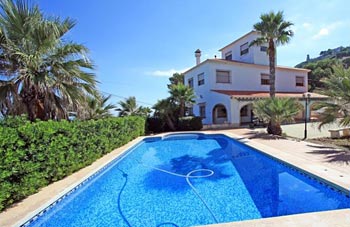 Denia is on the Costa Blanca and is an ideal place for buying property, either for a holiday, or a permanent home. It provides easy access to the A7 motorway, or the national road N332, which will take you to either Valencia or Alicante – a 60 minute car journey either way. The railway station is in the centre of town, where you can get trains to most of the towns on route between Alicante and Denia, or the bus, both of which are very reasonably priced (if a little slow).

Denia Property prices are not cheap, but still fairly reasonable, considering its excellent location. Cross the Montgo into Javea, and prices rise as they do over the peninsular into Moraira, Benissa Coast (La Fustera) and Calpe where the same type of property will cost approximately an additional 30.000 Euros.

Along the coast section of Las Marinas are mainly low rise apartment blocks, whilst continuing north into Els Poblets the area consists more of villas, townhouses and bungalows set back from the beach, or within a 5 – 10 minute walk. Las Rotas also comprises mainly of villas, starting a sea level and rising up into the Montgo area. Denia town offers a selection of apartments and town, or village houses, but these are in high demand from the Spanish and rarely come onto the market.

The area is very rentable for those buying property to let, and owners should expect an excellent rental income from Denia property whether it be a private villa with a pool, or an apartment close to the beach. There area provides much for the holidaymaker, a day trip to Ibiza, the local fiestas, the historical sights or the lovely beaches with their variety of water sports. Las Marinas is an excellent holiday spot with its wide variety of bars, restaurants and shops, and a regular bus service into the town itself, whilst the Las Rotas and Montgo areas provide a relaxing and peaceful break.