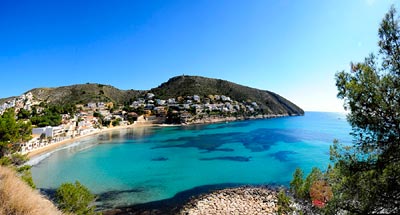 The Costa Blanca or White Coast as it is known, is made up of two clearly different parts – the North, where mountains provide the backdrop to much greenery, orange groves, olive trees, vineyards, almonds and cherries – and the South, which is slightly hotter, flatter and drier and is famous for having the biggest palm gardens and salt flats in the whole of Europe.

The Costa Blanca therefore offers both varied temperatures and landscapes. Starting at its most northern point in Denia you are able to travel it’s entire length via the ‘Autopista’ motorway which runs along the coast from Denia to Torrevieja at its southern point. Of course travelling inland is the most beautiful route and you will enjoy splendid mountain views, passing many small villages, caves, gothic churches, towns, castles and local landmarks.

On the Costa Blanca North, you will find many beautiful Mediterranean beaches (many with the European Blue Flag), sand dunes, watch towers and natural caves. Many of the towns are fishing ports and have harbours where many luxury yachts are moored.

Starting at Denia, with its famous castle, and harbour where you can catch a ferry to the Balearic Islands, you can travel over the Montgo mountain to Javea and then on to the old fishing port of Moraira.

Further south is Calpe, with its nature park at Peñon de Ifach (which is a rock jutting out to sea), then Altea which has a rural district and an ‘old Town’. Continuing along the coast, is the ‘entertainment capital’ of Benidorm, with its two famous beaches, skyscrapers, live shows, discos, Theme Park, Aqua Park and Marine World.

10km further south is the Spanish town of Villajoyosa, where you will find a large fishing fleet, then into El Campello, and San Juan, which are very popular with the British buying public.

Alicante city is at the heart of the Costa Blanca and divides the Marina Alta area (North) from Marina Baja (South). It is a thriving cosmopolitan city and is a leading centre of commerce, culture and tourism. It’s seafront promenade, the Paseo de la Explanada along the 7 kms of sandy beaches, is the place to be seen with its many street cafes and palm trees, and the city itself has many excellent shops, restaurants, museums, monuments, cultural activities and regular fiestas.

Tabarca Island is one of the most unusual places on the Costa Blanca. It is linked to Alicante and Santa Pola by a ferry service but no accommodation is available so only a day trip is available. However, there are some excellent restaurants on the island.

The main language of the Costa Blanca is Valenciano. This is very different than the traditional Spanish language, Castellano, sounding more French in origin.

The area inland Costa Blanca North has some of the most beautiful scenery in Spain.   Whether you choose to visit or live in the ‘campo’ away from civilisation, or in one of the small Spanish villages where you will find narrow streets, domed churches, quaint little shops, a town square (Plaza) and become immersed in the local community -(as opposed to coastal life), you will almost always have views of mountains, vineyards, orange trees, olive trees or lush green areas.